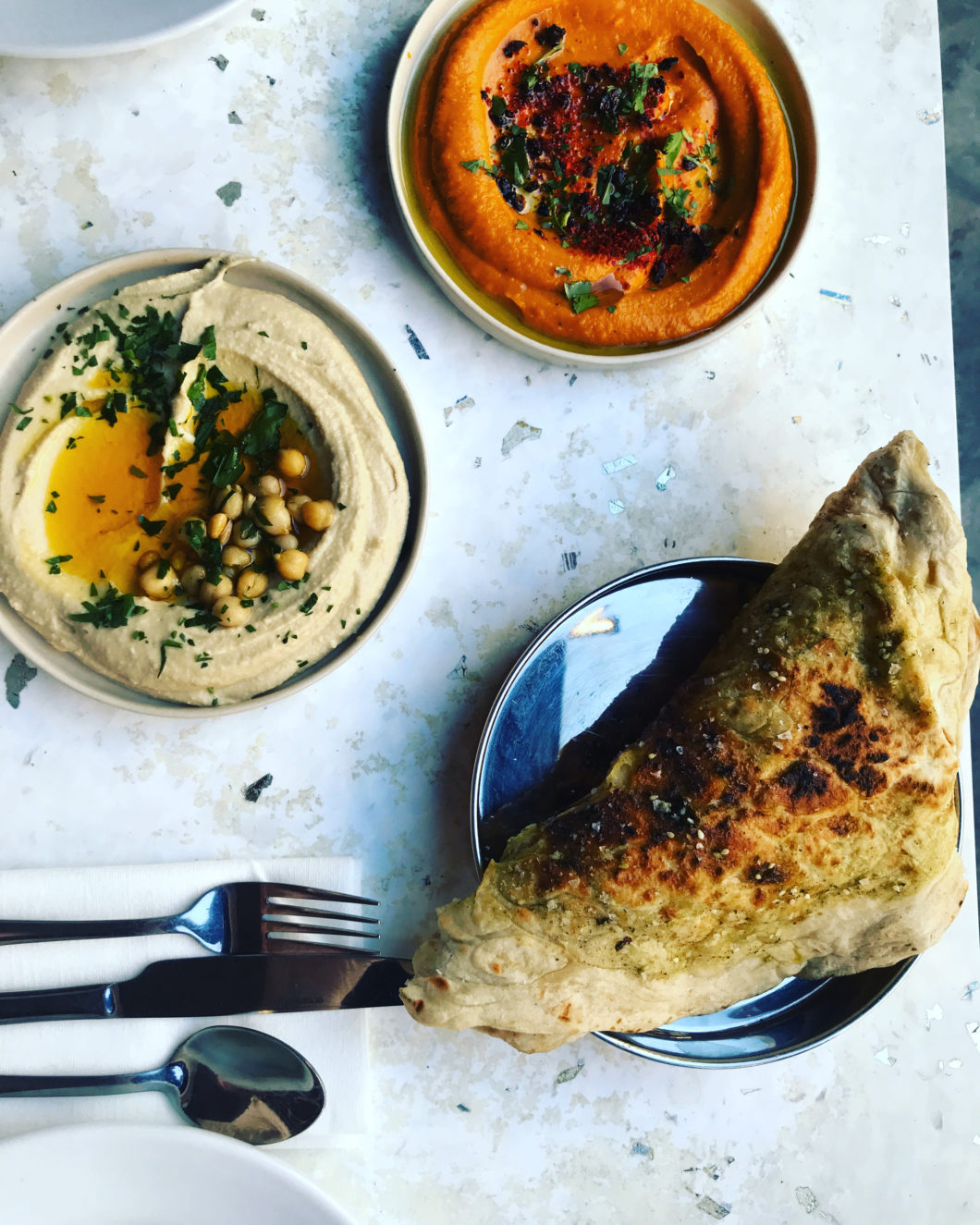 This January I am embarking on my first ever Veganuary. If you’d told me a year ago I’d be doing this I’d have found it unbelievable, but in the last twelve months my opinions on vegetarian and vegan lifestyles have changed significantly. I think given the state of the planet and the excess in all our lives it’s time to look at what changes we can make, no matter how small.  And yes, I have watched Game Changers. I found it extremely interesting, a real eye opener but it’s always important to check your source. This film was produced by James Cameron and his wife, who have invested US$140 million in plant-based proteins (according to multiple sources) including a company that produces pea protein, which is a key ingredient in Beyond Meat. There is loads of material on the internet debunking much of what Game Changers says, I’m not going to get into it here, but feel free to check it out.

Back to Veganuary, for years I’ve done the Body Coach plan which is very meat heavy (there is now a veggie plan) and I felt that I was eating a lot of animal protein and I’d like to cut it down. So for me this is a challenge to see if I can do it, not least as I have two trips to Copenhagen and one to Athens this month. Copenhagen should be fine, amazingly my company provides lunch everyday and they will order me a vegan option. Athens, harder, one of my overriding memories is the sweet smell of meat barbecuing in the air.

So here is my Veganuary  journey.

Happy New Year!  I’ve been at home for Christmas and New Year so start Veganuary at my sisters in Glasgow.

Breakfast – A slice of multi-grain toast with a really simple guacamole.  This is how I made mine but it really depends on what’s in the fridge. This is enough for a very generous portion on a large slice of bread.

Half an avocado mashed, I like mine quite chunky

4 cherry tomatoes quartered
Juice of half a lime

Lunch – A couple of satsumas and some salt & vinegar crisps

Dinner – Starting the year on date number three with the chef, he is not overly impressed with my veganism and so we choose a non veggie place so he can have free reign.  We go to Pizza East, he likes to sit at the counter, I like to sit at the counter, if only it was as simple as that. There is not a great deal of choice and so I opt for the only vegan options.

Pizza with pumpkin (rather than a tomato base) broccoli and chilli.

The pizza was good and the pumpkin worked well, it was much spicer than I had expected.

Breakfast – Homemade granola with oat milk.  I make a big batch of this and it’s great for when the cupboards are bare, like today.  I’ll post the recipe at some point.

Dinner – I was convinced I had seen a recipe for a shepherd’s pie topped with potato and parsnip mash.  Of course when I go to Waitrose I don’t have the recipe with me and despite there being three different recipes on Bosh for shepherds pie none was the one I seemed to have imagined. So here is the recipe for my vegan shepherds pie. 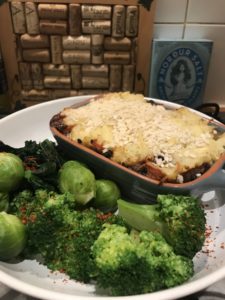 Cut your veg into similar sized pieces and boil until soft.  Add seasoning, milk and marg and mash to your own liking. I have to tell you that I had neither milk nor marg in little brick lane kitchen and so used some plain soya yoghurt which actually worked fine.

A good glug of oil, olive or rapeseed
One brown onion diced
Two carrots diced
Two sticks of celery diced, try to cut all your veg to a similar size
250g of cooked lentils, I used a packet but a tin would be fine and cheaper
One vegetable stock cube
A tin of chopped tomatoes
Teaspoon of ground coriander
Teaspoon of tomato puree
Salt and pepper to season
Two tablespoons Balsamic vinegar
A good splash of red wine (I didn’t add this as the rest would have gone to waste (dry January) but I think it would add to the dish if you have some)

Heat the oil in a large frying pan.
Add the onion and coriander to the pan and cook until soft but not brown.
Add the carrot and celery and cook on a low heat for five minutes before adding the tomatoes, puree, balsamic, and stock cube.
Turn the heat down to very low and add a good splash of water, allow the veg to braise.  This will take about 30 minutes, if you need to add a little more water.
Once the veg is soft add the lentils and season.
Split across three small dishes or one big one, and top with the mash.
Pop it in the oven for about 20 minutes or until lightly browned.
Serve with whatever green veg you fancy.

Lunch – I work with a vegan, a burger addict, and finally someone that is heavily plant based but loves junk food.  This meant that I was persuaded to try the KFC Vegan burger, which launched yesterday. As someone that couldn’t tell you the last time I was in a KFC and rarely eat junk food, it tasted like processed food to me.  It was fine, it reminded me of a McChicken Sandwich, it was a bit dry and overcooked. I won’t be rushing back. 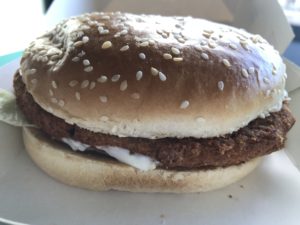 Dinner – N surprises me with a visit and we want something cheap and cheerful and so end up at Mooshies on Brick Lane, for another burger.  This is in a completely different league to KFC.

The bun is a handmade multigrain brioche which is really tasty not sweet and more than up to the job of holding together the large quinoa and black bean patty, even with all of the sauce and cheese.  Everything here is plant based, there are no processed meat substitutes on the menu. 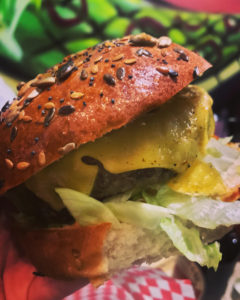 The texture of the burger is very good, it’s a little drier than beef but its not dry, it doesn’t collapse into rubble as you eat it.  It has great umami flavours and is topped with vegan cheese, homemade burger sauce, which is very similar to that of a very well known chain, caramelised onion, lettuce and gherkins.  It’s also massive, I struggled to finish it.

We also shared some sweet potato chips which were perfect, crispy to the last one. 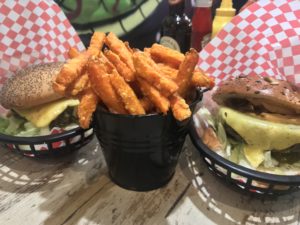 Lunch –  B and I went to Bubala for lunch, it’s had a couple of amazing reviews and it didn’t disappoint. Every thing on the menu is vegetarian with 73% (yes, I did the maths) either vegan or with an option to be so. I’ll be writing a review and when I do you can read it here. 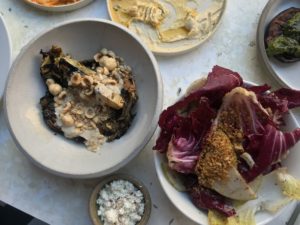 We absolutely didn’t miss meat at all. Highly recommend this lovely little place.

Dinner – I have a date tonight, he is not phased when I announce I’m doing both Veganaury and dry January and suggests Redemption on Old Street. This is perfect because it’s both dry and vegan. We have a couple of really good cocktails. Special mention for the flu fighter martini. Just be careful not to touch the chilli rim of the glass and then put that finger in your eye!

Anyway, we didn’t eat here. You’ve guessed it, we went for burgers, FFS! This time to Simplicity, the new Vegan, no waste burger restaurant from Neil Rankin, also on Brick Lane. At 9.30 on a Saturday night we are the only table. I go for the cheese burger and we share the salt and vinegar fries and Thai laab (salad).

The burger is made from fermented vegetables, from what I’ve seen mostly mushrooms. It’s pretty tasty, again very similar in overall flavour to something Mr McDonald makes. It’s significantly smaller than the Mooshies burger (I’d say by a third) and the same price. 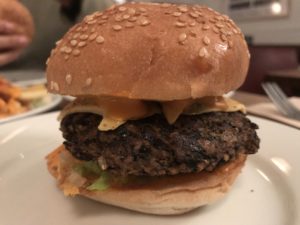 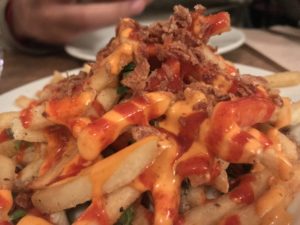 The laab was excellent, fresh, zingy, sharp thai flavours but the broken burger through it was just a bit too much burger in one meal for me. 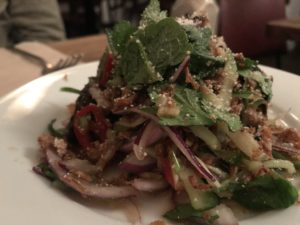 And no, there won’t be a second date.

A super lazy day at home. 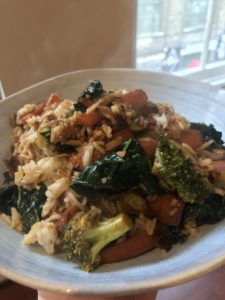 I’m off to Copenhagen for work so let’s see how this goes travelling.

Brunch – Itsu’s veggie Rice pot is the best hot, on the go option at Stansted. Just a pity it’s so much more calorific than the non vegan ones. 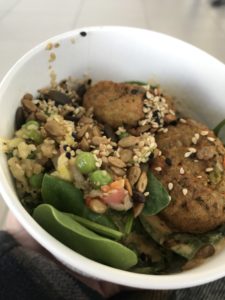 Also how great is this refillable water flask at just 10p more than plastic. 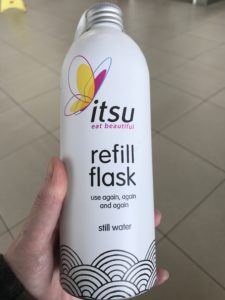 Dinner – head out and end up at California Kitchen where all dishes am be made vegan. I have the Bento Teriyaki rice bowl with teriyaki tempeh and mushrooms, sweet potato, edamame and green veggies with sesame seeds. It’s pretty tasty and my first time trying tempeh.  And what is tempeh? It’s made from cooked soya beans that are fermented. Traditionally from the Philippines it’s less processed than tofu, has more fiber and vitamins, as well as being firmer and tastier. I really like it and will definitely try it again. It’s got a nutty hint and an umami flavour. 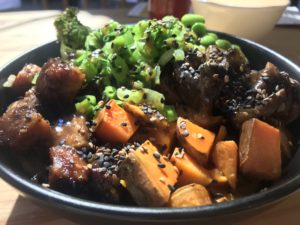 Dinner – I popped into Borgens food court and had a vegan gyros with asparagus from The Fat Greek. It was very tasty although mostly mushrooms and some more salad would have been great. This place does THE best chips, not sure what’s on them, at a guess salt, paprika and oregano, but they are so good, as is the roasted red pepper sauce. 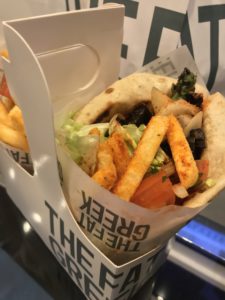 Week one is over and so far so good.