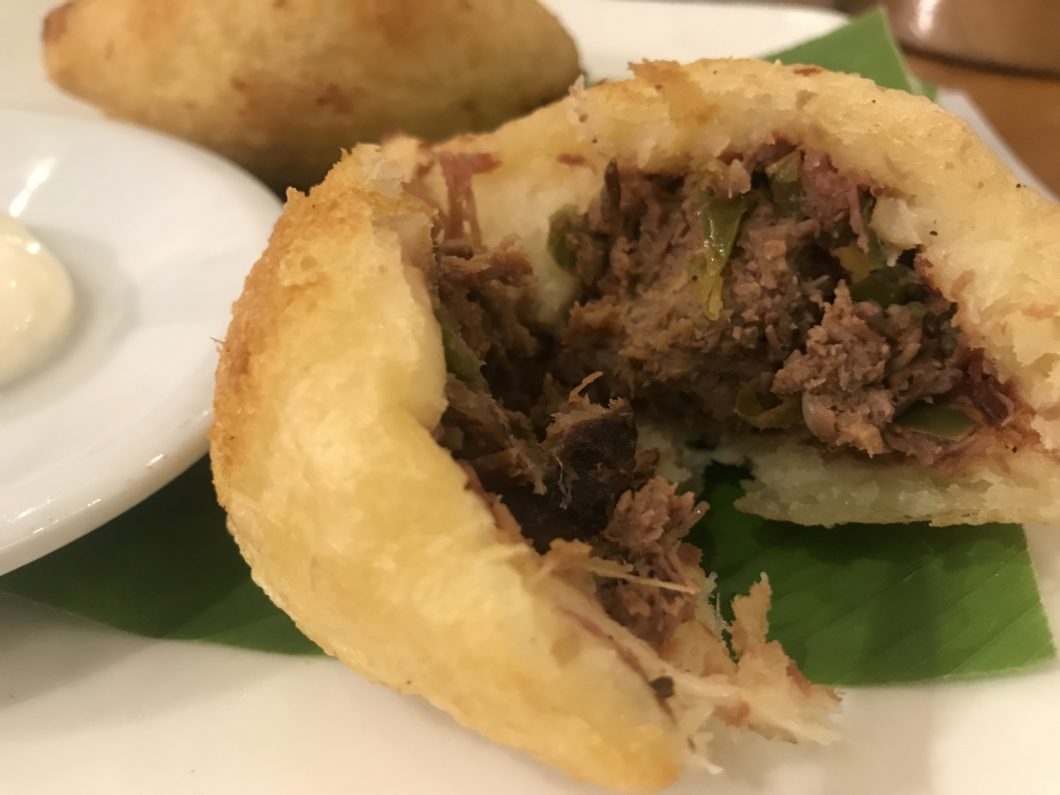 Regular readers will know that often when planning a trip, decision making on where to go is based on restaurant availability and, sometimes (quite often),I have booked into my must go places before I’ve even booked a flight.

When L and I decided,back at the start of the year, to set off on an adventure, little did we know quite how much would change between booking and setting off. Let’s just say, it has been a year of change, mostly good, but change is, nonetheless, unsettling and challenging.

We spent Sundays on the couch researching where to go and what to see.  L reading out reviews of hostels and beach huts, while I chopped and basted lunch in my little Brick Lane kitchen.  It went without saying that I would be fully responsible for all of the restaurant decisions and I took this very seriously.  Reading travel mags, national newspapers and blogs for what scant information I could find. Colombia makes few entries on any of the big hitter lists like 50 Best and Michelin.  It is also worth noting that we were not going to be in any of its biggest cities, Bogota, Cali or Medellin.

We would spend both the start and end of our trip in Cartagena and this was where I focussed my efforts booking two restaurants.  And so, on our first night, we set off to the San Diego women’s prison for dinner.

Interno is an incredible project run by Johana Bahamon which opened at the end of 2016.  It’s aim is to ensure that the justice system offers rehabilitation and opportunities to gain new skills before the end of sentences, enabling the women to reintegrate into society, find work and limit the chances of reoffending. They see cooking as an act of love and generosity and that is something I very much believe in.  In 2018, Time magazine named Interno as one of the 100 greatest places in the world.

There is, of course, security on arrival but it’s friendlier and less in your face than you’d find at any West End nightclub on a Saturday night.  When we arrived, there were only two other tables and we had our pick of seats and did, in fact, move table twice, largely due to a downpour outside that caused a bit of a leak in the roof.  Remember, this is still a prison, in a country with a very low GDP.

Despite this, with its fuschia pink napkins and palm print wallpaper, you could easily be in a trendy bar anywhere in the hipster world.  Until, that is, you see the pink bars that separate the kitchen from the dining room. Service is warm, a little nervous, a little shy. 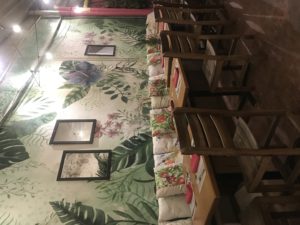 They offer a set menu of three courses, with a fruit juice for COP $90,000, roughly twenty quid.  It’s not cheap by Colombia standards but it is not expensive either. All of the money made goes into helping with rehabilitation of the female inmates, training and equipment to help prepare them for a life outside of prison.

We both opt for fried yucca parcel stuffed with beef, with sour cream and mint salsa as our starter and our first try of Corcozo.  This very popular small, red berry-like Colombian fruit tasted to me a bit like creamola foam, which I have discovered was relaunched this year for anyone craving it. 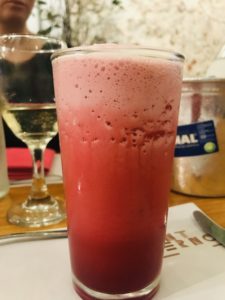 One plate arrived and we were unsure if this was both portions, as the Carimañola de posta were pretty sizeable. 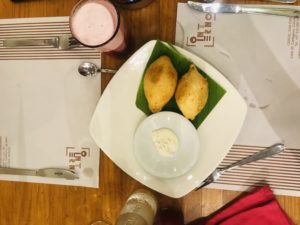 Tearing into crispy outer shell, gave way to a pleasantly chewy yuca packed with savoury mince.  The sharp tang of sour cream and vibrant mint salsa all demanding to be heard in each mouthful. A second plate arrived! 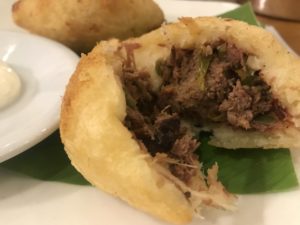 After these, we were already getting full but we couldn’t give in, and sat back and watched as a small waterfall appeared by our table as the heavens opened outside.  I love a water feature as much as anyone who grew up watching Changing Rooms in the 90’s but we decided to move.

For mains, we went as local as possible, this being our first night after all. Posta cartagenera con ensaladilla y arroz titoté, or Cartagena-style sliced beef with salad and coconut rice.  This was our second meal since landing and the second appearance of coconut rice, all I can say is, it’s lucky I love rice, we ate a lot of rice in Colombia. 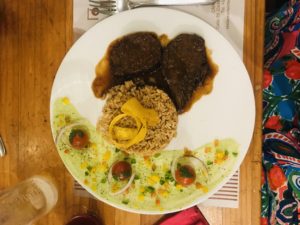 The beef is slow cooked with lots of soft warm spices, palm sugar and coca cola, making the sauce rich, sticky and aromatic.  The beef falls apart when touched and melts in my mouth. It’s incredibly good, simple cooking. I love the coconut rice with it. 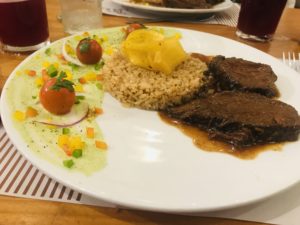 By this point we are stuffed, almost too full to drink our wine, but the downpour continues outside so we persevere.  There is a wonderful sense of achievement and pride in every interaction we have.

We would have forgone desserts but they are part of the menu and we just manage a mouthful of rice pudding with a fruit compote.  It was surprisingly light and fresh. 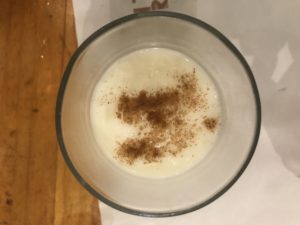 If you find yourself in Cartagena, this is a really interesting restaurant to visit; the food is excellent, it really exceeded my expectations and it’s a great way to give back to somewhere you are visiting.  You can book via Whatsapp, and it was pretty instant, whereas online, I didn’t get a reply. All my Whatsapps were in Spanish but google translate is your friend here if you need it.

And with this we set off for our first night in Colombia, the smell of fresh rain in the air and two weeks of adventures ahead of us. 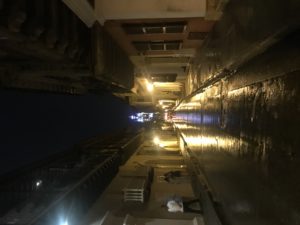