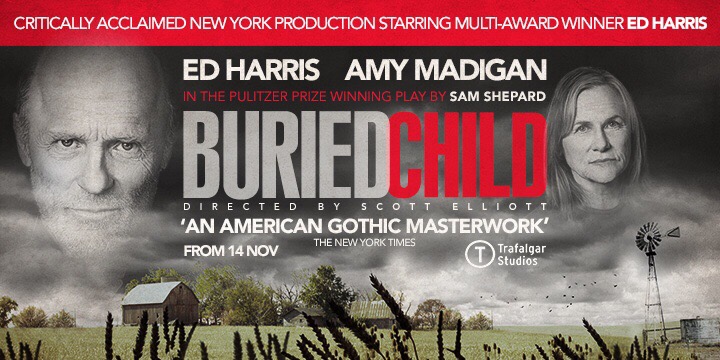 After our excellent lunch at Lyle’s Tom and I ubered into town to the trafalgar studios to watch The Buried Child. I was particularly exited as the last thing I went to see I left at the interval and this featured the excellent Ed Harris in the role of Dodge.
This award winning play written by Sam Shepherd is set in 1970’s rural America and centres on Dodge and Hallie’s family as it makes its final descent into complete breakdown. It’s extremely dark set in the midst of an economic downturn and dealing with theme of alcoholism, mental health, murder and incest.

It’s a long play, three acts, but it is profoundly moving, not least with the state of the world as it is today, very much as it was back in 1979, recession and political unrest.
The cast are all brilliant especially so Ed Harris, and not because he’s the big name Hollywood actor. Also stand out is and making her west end debut like Harris is Charlotte Hope in the role of Shelley.

If you can get tickets, this is one that will stay with you long after you leave the theatre.

Tuesday marked the passing of another year. Thank

May all your yolks be runny, that’s my wish for

I’m loving this return to summer. What I’m not

This is the fish finger from the new childhood men

Some times there is just one thing that will satis

If you know, you know. So happy to be back @smokin

I feel a bit melancholy saying goodbye to the last

On Tuesday night I reminded myself to take the duc

It feels like I’ve not cooked anything new for a

About last night ..... When Shona met Rumbie in re

Back in February @srobbiedoggie & I spent a glorio

This heat is just too much. So much I’ve come ba

I had my first trip to Copenhagen this week since

Want something light but utterly delicious for the

This is one of my favourite dishes to cook, its ve

AD - That’s right, that’s my passport you can

It’s Friday! I’m back in Glasgow with my sis.