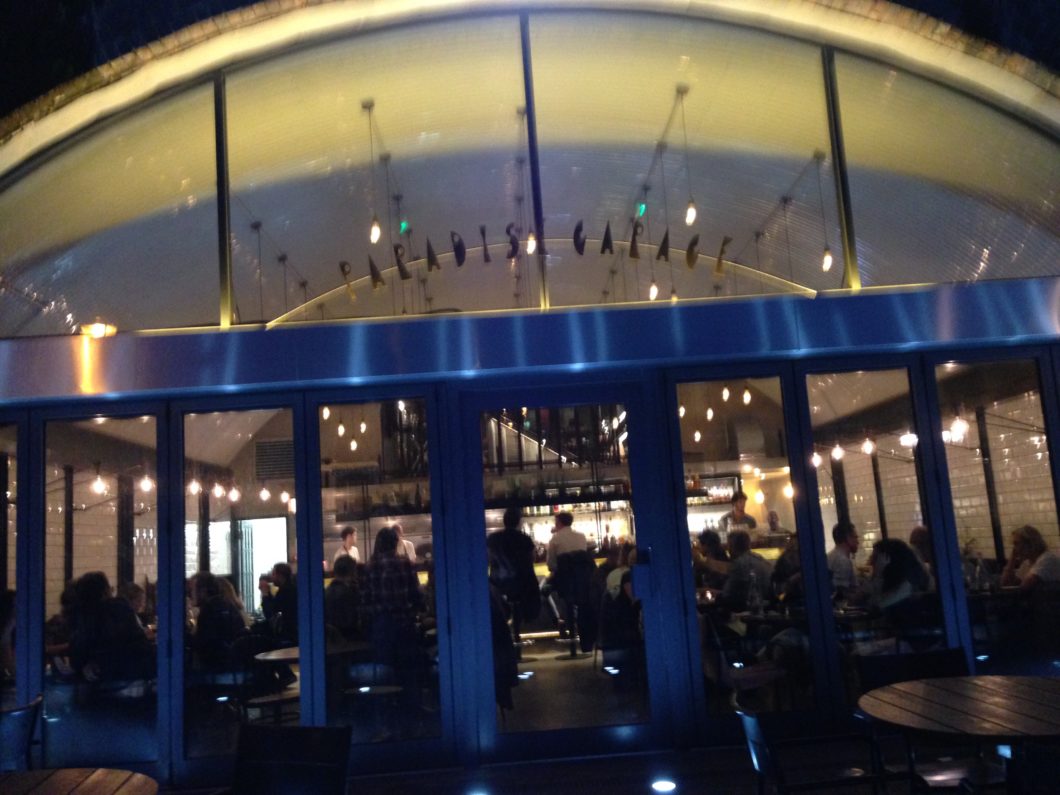 Back in May when we dined at Sager and Wilde Mr Gosling had stumbled across Paradise Garage amongst other delights in the arches at Bethnal Green and duly booked it with a promise that I would love it.

We planned to go for a drink first but it ended up being one of these days where suddenly you’re about to be late, not helped by my insistence at using a hairdresser on the other side of London, still it’s closer than going to Glasgow which I know is excessive.

Paradise Garage is run by the team behind The Dairy and The Manor in Clapham neither of which I have visited but now almost certainly must. The focus is very much on fresh, local seasonal cooking. While the space is identical to that of Sager and Wilde, it has a completely different feel. It’s bright and airy and open and the atmosphere is relaxed, at times almost chaotic but never in a bad way. It feels a bit like having dinner at your best friends house when they have arrived in just before you and are bustling about in the kitchen.

We decided to go for the tasting menu but it was a tough call because the a la carte excited me A LOT. At only £45 it’s fantastic value and even better is the four course lunch menu available all week, including weekends, at just £25.  For drinks we went with the wine pairing which includes cocktails and beer options too.

And so to dinner I started with mint Gin and Tonic which was perfectly refreshing for the warm night if a little bitter on the end. Mr Gosling went with a local beer which he loved,in particular the beautiful design on the label.

Fresh sourdough appeared quickly with a smoked whiskey butter, I love butter, more than is good for me. It was good not Iceland whipped by angels good but good. Along side this we had a couple of small slices of different salumi.

Our first shared dishes were Sicilian tomatoes, trombetta courgettes and jersey Royal mousse and lamb heart, fennel kimchi and black pepper. On the tomato dish I was underwhelmed by the tomatoes, they weren’t the stars they should have been, the flavour just wasn’t there for me. The lamb heart however was amazing, the sauce, an egg yolk emulsion with black pepper was sensational, wipe the plate clean sensational, I must learn to make this.

Next up salt cod brandade, squid ink, olives and cuttlefish crisps. Beautiful to look at which the dramatic black of the squid ink. The crisps like giant fancy prawn crackers were very good. The balance of the flavours worked better than I expected, with the meaty cod sitting well with the salty olive slices.

Up next mushrooms with turnip and toasted oats. I used to hate mushrooms largely because when I was a kid mushrooms came in what looked like a little shopping basket, and I ate an entire one of these raw, that must be 1kg of mushrooms, but enough of that. Now I love mushrooms I think they are one of the best meat substitutes around, and I pity any veggie who doesn’t like them, they are so versatile. Great mixture of favours and textures, another winner.

It was all going so well with the mushrooms until the next dish, Lucy Marianna’s skate. Soft, delicate, beautifully caramelised on the outside, with Norfolk peer potatoes, seaweed and mousserons. I put one of these in my mouth and it wasn’t happy, I think it was combination of the flavour and texture but me and mushrooms fell out. Worst still, I wasn’t sure what it was on that forkful I didn’t like so I then had to play food roulette, identifying each element. Despite this I loved everything else once the offending mushroom was removed.

My only gripe with the tasting menu is that when it comes to the main you don’t effectively have a choice if you are dining as a two. There are two options, Welsh lamb or quail but the quail is only served for two so effectively not giving you a choice. Because Mr Gosling is incredibly tolerant of me so we had the quail, despite the fact I think he would have picked the lamb, thank you.
It was served with borlotti beans, apricots, and almonds. Also nestled on the plate was sorrel and Jerusalem artichokes and a thing of beauty – a tiny little quail faggot using up the offal and some venison mince, this with the sharpness of the apricot purée, oh so very, very good. Everything just works on the plate the quail is moist and tender and the beans are amazing, I don’t know what they do to get that flavour in there but they do by the bucket load.

We had a rest before desserts or pre dessert. By now the restaurant was really busy but despite this the staff in particular Claire was attentive, and happy to chat and explain the dishes. Claire’s relaxed, friendly attitude embodies how the whole place feels, she’s great at what she does.

Pre dessert was yoghurt, peas and tarragon, this contains two things I love. I can come close to making myself sick eating fresh peas out of the pod. I love the way the light fresh granita cuts through the sweetness of the peas below, and the tarragon meringue was so light.

I’m not a dessert person so Mr Gosling chose this course and went for the chocolate option, unsurprisingly.
The nut brittle was the best bit for me, the chocolate ganache was incredibly rich but would be any chocolate lovers dream and well balanced with the burnt apple.

Our final drink was an amazing cocktail, which was rich and creamy with a beautiful mouth feel and made me very happy.
I love this place and I’ll definitely be back for lunch and to try brunch.

This weeks #homingpidgin is my favourite menu over

Living where I do I am no stranger to a curry. Th

For the next week I will silence my voice here to

Good morning. May all your yolks be runny this wee

Last night I decided to try a new restaurant takea

Happy Friday! I’m so excited for the weekend, es

This week at #virtualsupperclub we celebrated Japa

It’s funny how sometimes you end up with even mo

We take picnics seriously here in E1. The weather

In this house Friday night means only one thing, p