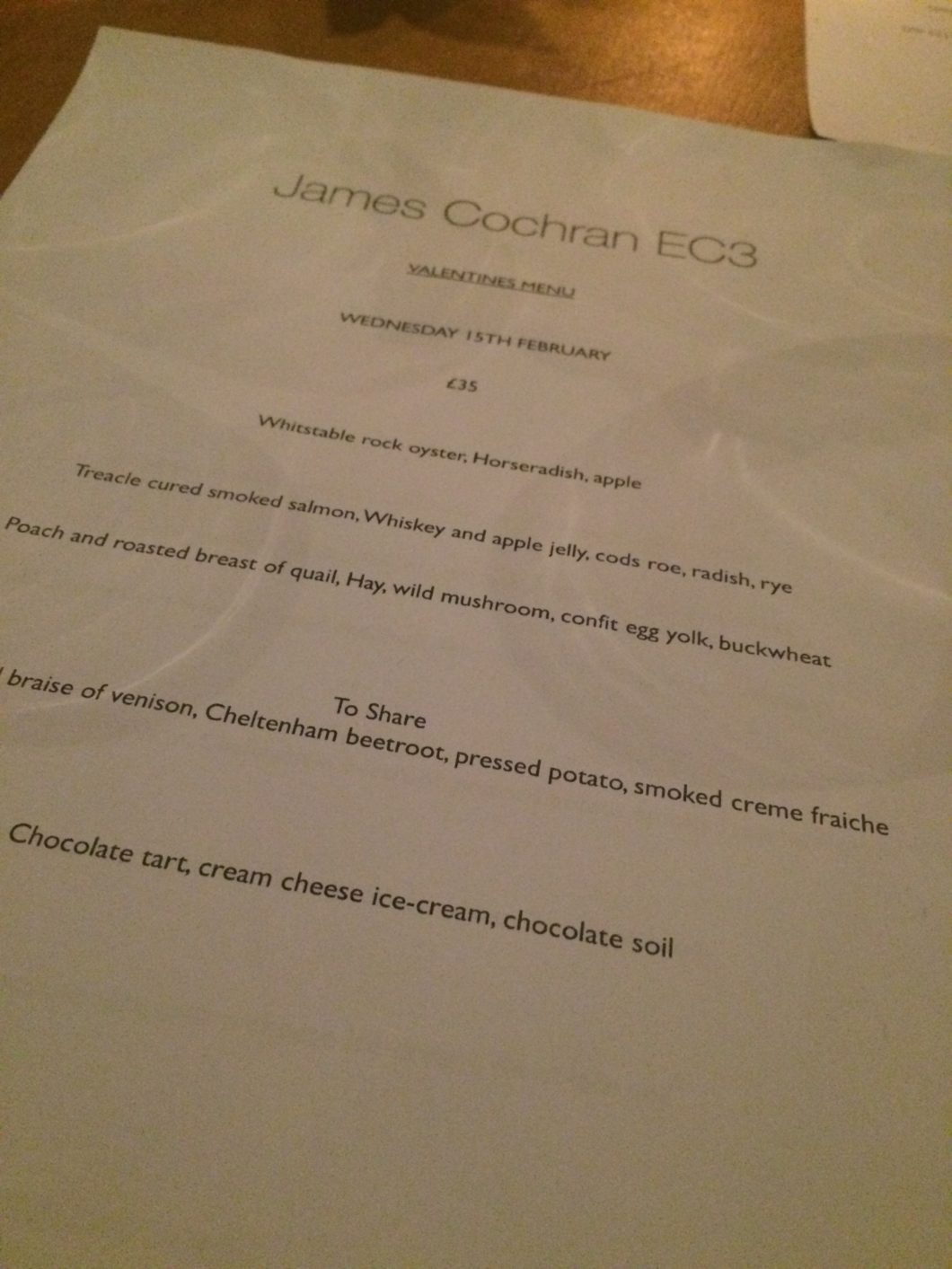 It was with much anticipation that I headed out on Wednesday night. My destination, James Cochrane EC3, had been on my list for sometime and had recently received a slew of brilliant reviews. My dates for this belated Valentines, the lovely Seetal of Savla Faire and Georgie of Georgie Porgie, two passionate food bloggers I was lucky enough to have met before Christmas.

Firstly, I got lost. The location is slightly random but, trust me, it’s worth seeking out. I joined Seetal at the bar which, incidentally, opened three weeks ago with two for one cocktails and the promise of free jerk chicken with every bottle of wine ordered. We caught up over a glass of Berry Brothers good, ordinary Claret and jolly good it was too. Georgie was hot on our heels.

We three met while doing some market research for a snack food company. We were in a small group of female food bloggers and, when we left, we all promised to keep in touch. Now, the others in the group we haven’t seen, but the three of us have managed to check in and, even better, we actually organised to meet for dinner. The hardest part was picking a venue. We all have extensive lists but, on this, our first of many dates, I got lucky and we chose James Cochrane, from my list.

The restaurant is bright and open, with an eclectic mix of art on the walls, a giant slobbering cow above us, bare breasts opposite. All of the tables are large and we could easily have had another three people seated at ours.
We were offered a choice of two tasting menus, especially designed for Valentine’s Day. Now, disappointingly, neither featured James’ signature jerk chicken. However, I had called in advance (several times in fact) and was assured we could have the chicken, in addition to the set menu. At just £35 for five courses and £55 for seven, they offer unbelievable value. In the end, because we also had the chicken to squeeze in, we decided to go with five courses.

Our first course was a whitstable rock oyster, horseradish and apple. The oyster itself was clean and light with a real fresh flavour but we all struggled to pick up on the horseradish or apple.

This was followed by treacle cured smoked salmon, whiskey and apple jelly, cod’s roe, radish and rye. I, as you know, love all food but smoked salmon is not something I would ever pick on a menu. The salmon had a wonderful smokey sweetness to it, the texture soft and melting. All of the flavours on the plate worked in complete harmony; the apple sauce and richness of the cod’s roe and, finally, to the smooth texture and peaty flavour of the whiskey jelly cutting through these and cleansing the palate.

Our next course was met with a collective sigh of joy as it was placed in front of us, and what a joy it was. Poached and roasted breast of quail, hay, wild mushrooms, confit duck egg and buckwheat. The smell was rich and meaty. I considered picking up the plate and licking it, so as not to leave any of the sticky, delicious gravy behind. The quail was perfectly cooked, moist and full of flavour, the duck egg yolk adding a richness to everything it touched. The grains of buckwheat like little jewels glistening with the gravy. In case you are unsure, I loved this dish.

Next, we broke away from the menu for the much anticipated buttermilk, jerk chicken. Would it live up to expectations? Would the hype be too much? It may not look like much but,let me tell you, this was fucking(!),amazing chicken. I can’t believe they were giving it away with wine! Everything was just perfect. The chicken was juicy and tasty, the batter, oh the batter. It wasn’t at all greasy, not a trace, it’s the crispiest, crunchiness thing I’ve ever tasted. I loved the toasted corn kernels. The sauce, whoa, it’s hot, my whole mouth was filled with its warm, sweet flavour. This is simply the best fried chicken you can eat, period.

As it was Valentine’s (for three whole days at EC3!), our main was sharing. We had watched it arrive at the tables around us and were eager for our turn.
Now, we all loved the food, but the service left much to be desired. Food was not so much delivered as abandoned on the table. Not once were we told what we were given, much less a detailed description. Had we not kept a menu, we’d have been lost. It wasn’t bad, just completely indifferent which, actually, is bad.

Our venison haunch & braise, Cheltenham beetroot, pressed potato and smoked crème fraiche looked beautiful, the venison pink and tender but, where every other table had each received a large, chunky chip of pressed potato, we had, what very much looked like, one cut into three. I asked our waiter who wandered off and never came back with a response. When we found him again, he told us there was no chef to ask and no managers to speak to. It was his first day. The beetroot was firm and sweet, topped with something we thought was some type of fat but couldn’t identify and, when we asked, it was clear no one else knew either.

The potato, while small, was crispy outside and soft inside. The venison haunch was perfectly cooked, pink, tender, gamey but not overwhelming, it melted in the mouth. The braise was a different beast (possibly literally), soft, drier but tasty, it benefitted from a splash of gravy.

The unexpected star of this course was the smoked crème fraiche. Who knew you could smoke crème fraiche and that it would taste like, I don’t know, angels’ tears? It was amazing. We, literally, wiped the bowl clean.

As we approached our final course, we were definitely feeling full. But, being the troupers we are, we persevered and it was so worth it.
Chocolate tart with cream cheese ice-cream and chocolate soil, was a dream for me, but might be less so for those with a real sweet tooth. The pastry was crisp and held the glossy, dark chocolate which was just bitter with no trace of sweetness. The cream cheese ice cream was a sensation which we all agreed shouldn’t work but did. Actually, if anything, we’d have liked a little more of this to cut through the richness of the tart, the hint of saltiness was perfect. There were hints of coffee and malt in the soil, like coffee malteser , we think, but no one here can tell us any more than we can guess.

We all loved the meal. I have been raving about it. The food was stunning, it was also a complete bargain. Service, the night we were there, let it down; there was no love in it. The girl who brought our bill (we asked again in pursuit of the missing chips,) had only been there three days. Good staff are key but they have to have the tools to do their jobs. In the end,we had one of our mains taken off the bill, but I still don’t know what happened to the chips. We suspected, as the last table, they ran out. These things happen but own it, tell us, apologise.

The location is random, the service indifferent, the décor could be a distraction, ( please straighten the pictures, my OCD can’t take it) but, the food, oh the food, it’s making me smile thinking about it. If I wasn’t in the motherland I’d be there for lunch today.. Actually I’m going to book now for next weekend, I need to eat everything James Cochrane cooks.
Book this before it becomes impossible to get a table, you won’t be sorry you did.

Thanks to @charlotte.mctoms for the invite to #fan

Friday and #pastryporn time. I don't know about y

Throwing it back to one of the last dishes @srobbi

This weeks #betweentheslices was a new discovery f

I can’t believe how fast this month is going. H

The weather is meant to be getting better, the sun

Over the Easter or should that be Eater weekend I

Restaurants, pubs and bar in England reopen for ou

Welcome back everyone! I had a bit of an insta br

Happy Easter Friday! I am so excited about having

For this weeks #betweentheslices big thanks to @jo

Sweet risotto, something a bit different for hump

Happy Monday and for many of us a short week. Som

Hello lovelies. I am so late with todays post. I l

Like everyone I cant believe its been a full year