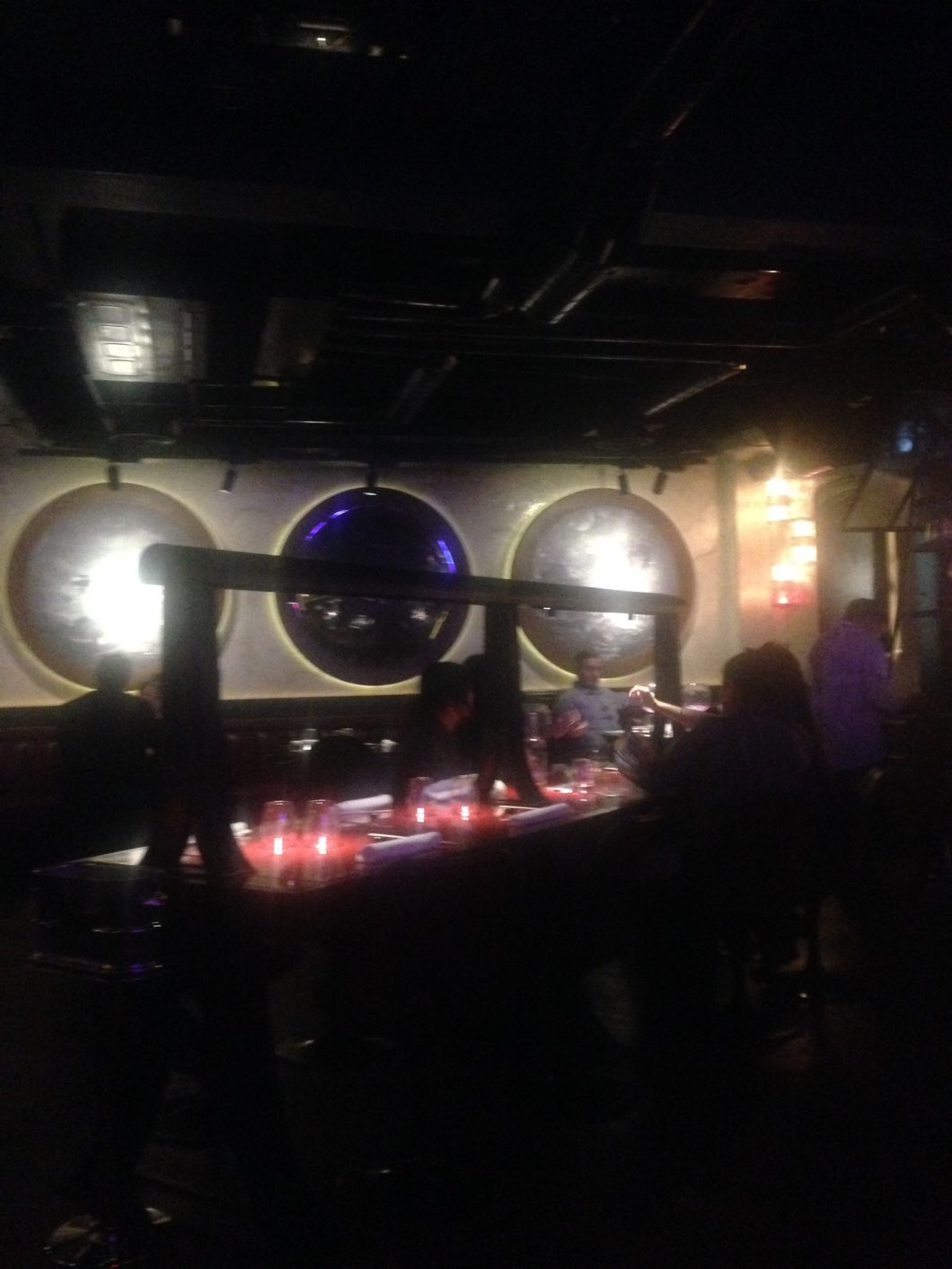 On Friday, I finally witnessed the creative genius that is Dabiz Munoz.  I really wanted to visit his three Michelin starred restaurant when I was in Madrid but, despite managing to make it onto a waiting list (yes this is a thing now), I didn’t make it to a table.

Dabiz is the enfant terrible of Spanish cooking. His aim is to shock your senses and not only with his food.

When I arrived at 7pm, the first thing I noticed was the amount of staff, not least because the waiting staff were dressed in straight jackets and the managers in tail coats. Coming downstairs, you walk past the bar and into the restaurant with a vast open kitchen, running the full length of the left side of the room.

We were seated at a long sharing table which doesn’t allow for much space, given that the menu is designed for sharing. If you are after an intimate dinner for two, I’d request a table.  Even better, try to sit at the counter, chat to the chefs who serve you here and watch each dish being prepared.

The menu has 17 dishes and only one dessert, so don’t worry about leaving space.  Our waitress told us more desserts were planned.  Each dish is a combination of world flavours, designed I guess, to make you think, to trick your senses?

We were slow to order and, as we poured over the menu, we took advice from our waitress which, interestingly, was completely different to the advice she gave to other diners who were seated next to us later.  The staff are plentiful and friendly and many (all?) seem to be Spanish, sometimes slipping into Spanish when replying.  I’m not sure if this intentional or a natural slip.

For our first round, we ordered the famous Pigs ear Pekinese dumplings. These came on a sheet of greaseproof paper which was slid onto the table between us.

The paper was splattered with strawberry hoisin sauce on which sat the dumplings, each topped with some crispy skin and a pickle.  Scattered over this were freeze dried strawberries; it looked like a crime scene. One thing I do love here is that you are encouraged to use your hands.  You pick up the dumpling and smear it through the sauce.  It was good.  The hoisin was sweet and intense, the crispy skin sticky and very good. It was a great combination of flavours.  Despite being a sharing menu, this came with three dumplings. Why? Four seems like a logical number to offer. As it turned out, it was decided for us that we would order an extra one (as you can with many of the dishes). We only realised this when the bill came at the end.  Neither of us had any recollection of requesting this.

Next up and arriving at the same time, was the steamed club sandwich, suckling pig, ricotta, quail egg and chilli mayo.

A messy dish, I loved the flavours. Soft, fluffy bread with crispy coated, juicy pork nestled in the middle, the ricotta was intensely creamy but the mayo cut through some of the richness.

Our next dish arrived maybe some 40 minutes after ordering it, maybe more and I was hungry.  Despite the army of staff, service could be slow and no one seemed that bothered by the lack of our third dish. In fact, our next round arrived at almost the same time, despite being order almost an hour later.

Almost a Carbonara XO Style, was white civet of wild boar and coconut, Udon noodles with extra smoky bacon, fried egg and black olives. We mixed the dish at the table, bursting the egg yolk  and coating the noodles.  This was a tasty dish, the noodles were excellent, the sauce moreish and the bacon hunks, smoky and meaty.

Arriving just after this was our squid which was served with a Manzanilla wine,  served via a soda syphon to add a light spritz to it.  This was really lovely and refreshing, something I’d order again.

Anyway back to the squid which is on the menu as ‘enjoy a trip between Andalusian and Bangkok’s beaches. Grilled squid Thai rebujito with green papaya, sour and spicy hibiscus dressing, peanuts, fine herbs and lime pesto with a shot of Thai Rebujito’

The squid was perfectly cooked and lime pesto was bright and danced in the mouth.  It was a very, very good papaya and squid salad and the dressing was sharp and tangy. But was it that much better than others? I’m not sure.

We enlisted help for our last round and went for the Croquettes, named after Dabiz’s wife, ‘La Pedroche’ kimchi, sheep milk, toro tuna, botarga and lapsang souchong.  I love croquettes and for me a good jamon con queso croquette is truly a thing of joy.

These were truly little parcels of rich, creamy, unctuous joy. The fatty tuna melted as it hit  the roof of your mouth, perhaps so fast that it was almost lost amidst the richness of the croquette. Regardless, these were wonderful.

Our final dish was another tuna dish but one that hasn’t made it officially to the menu. That feeling of being let in on a secret is always too much for me to resist.

Seared tuna steaks cooked with a sweet soy and topped with a sour green mango.  These little hunks of deliciousness were removed from the skewer and we were instructed to drag them through the four accompanying sauces of Tamarind, sharp and sour, coconut, light and creamy, satay, lightly curried and finally Bergamont, fragrant and citrus, with an almost a sherbet like sparkle.  The addition of a spatula to help load the tuna was fun.

We finished with the only dessert on offer, panetera, according to the receipt.  This rhubarb light yoghurt foam, topped with raspberry coated popping candy and curried white chocolate flakes. It would never be what I would pick, given a choice, but it was good, but if you only have one dessert it should be a show stopper.

So did I enjoy my meal, was it worth the £216 we spent? (Which, I have to tell you, I think is wrong. On checking while writing this, there seems to be an extra cocktail on there).

It’s a feast for all the senses; there is a lot going on. The music is very loud, when we left at 10 pm there was a DJ playing in the bar. There are a lot of staff  and although service was lovely, there were some unacceptably long waits for dishes.  I liked everything I ate but for me, it just didn’t live up to the hype and if we had both been drinking we ‘d have easily gone over the £300 mark.  I really wanted to love StreetXO. Maybe it’s a slow burner, maybe we’ll be friends for years and then realize it was love all along but, right now, there isn’t a second date on the cards.