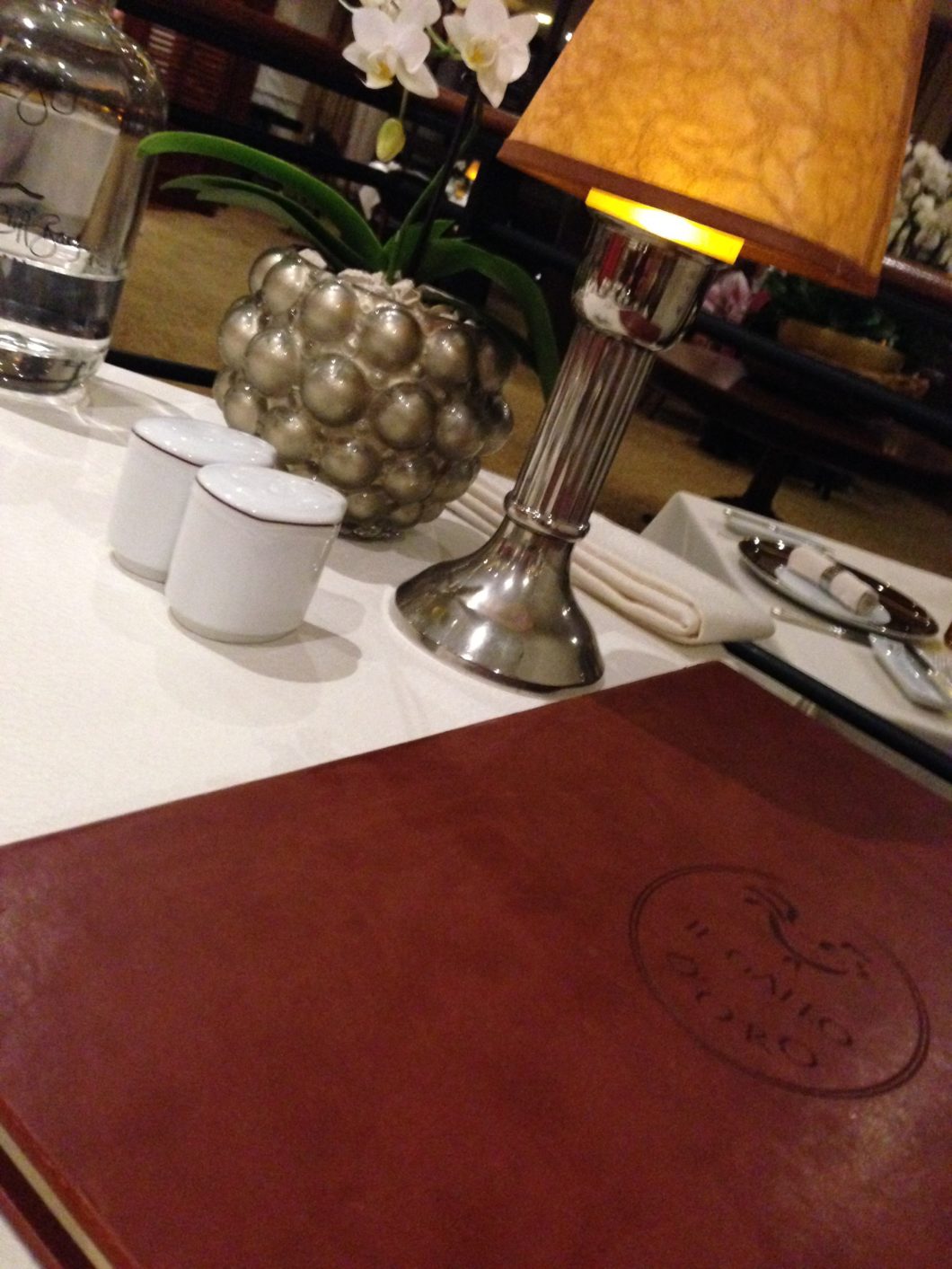 On our arrival in Madeira, we had tried to book a table at Il Gallo D’Or online but there was none available on any day before E left. I was disappointed but not surprised, this is Michelin star dining after all. So I called them, and was put on hold, several times. Eventually, I gave up and walked to the the Cliff Bay hotel where the restaurant is situated. This proved faster and ultimately more successful. After being as charming as possible, we were told we could, in fact, have a table at 8pm on Thursday.
We arrived at the appointed time, anticipation high. Jorge (at Uva)had told us earlier in the week that he had worked with Benoit and he was a great chef who very much deserved the star.

We were surprised to be led into an almost empty restaurant, with perhaps a quarter of the tables occupied over the course of the night.

Seated, we were given a brief description of the top experience menu, a five course tasting menu, and the four course signature menu.

We had quickly ruled out the tasting menu, as the starter had foie gras, but the maitre d’ assured us we could change that. In fact, it appeared we could change any of the courses if we wanted to. I was pleasantly surprised by the level of flexibility at such a formal restaurant and, because of that, we went with the tasting menu. The foie in E’s starter was switched for prawn and in the taste of the land dish, the veal was replaced by suckling pig. Dessert we would choose at the end, but would also change.

I went completely mad and had two glasses of wine, both chosen by the sommelier, both very good. All wines by the glass were under €15 so it was easy to let him do the hard work, knowing there would be no gasp at the end as the bill arrived.

After a selection of bread and some delicious butters, including one with peppers and one with seaweed, we started with an amuse bouche of langoustine served on cauliflower couscous with mango carpaccio. Sweet and succulent, it was one of the best langoustine I’ve ever tasted. E had some very gently smoked mackerel with tomato and basil.

Our starter was the intriguingly named Golden Ball by Benoit Sinthon, several things are named like this, perhaps in case you forget who is cooking?

This dish is a trio of starters. The first entitled it’s not cherry. The foie gras was presented as a cherry, served with brioche, fig sorbet and a port wine sauce. I loved the element of surprise in this dish. It tasted beautiful; rich yet light, all the flavours perfect together.

The second layer revealed a tuna tartar, with an apple and fennel sorbet, cucumber and a ponzu jelly. Excellent tuna and another dish with great balance of flavours.

Our final dish was an extremely delicate dish of squid, served almost like noodles with ekoni mushrooms in a dashi broth. The broth was fragrant, with a soft, woody flavour.

Our second dish was Portuguese Scarlet shrimp, served with sturgeon caviar, a bisque foam, disc of bisque and nori. The foam was intensely flavoured and rich, a real contrast to the salty caviar.

For our main, we opted for the suckling pig. This slice of pork belly sat on a rich jus, diced apple, peas and pancetta with sweet potato topped with walnuts and a beetroot jelly, and of course a passion fruit sauce, that seems to find its way onto every menu in Madeira. This was a great dish, I loved the different flavours and textures. The pork belly was good, but not the best I’ve ever had.

Our next dish came in a dish that looked like a frozen volcano. Underneath the goats cheese snow was a cherry compote and crumble. This was a really strange dish, for me, it didn’t work. The goats cheese had a strange texture because it was so cold, and then clumped together in my mouth.

Our charming maitre d’ brought us a glass of Blandy’s 1996 Colheita Malmsey. It was stunning, and I’m not even a big fan of Madeira. The taste of caramel and nuts filled my mouth, warm, rich, sumptuous.

In the end, we had to choose the magic pine branch, with five mini surprises.

This was elaborately served on a huge metal pine branch on which nestled three different chocolate desserts. These were then plated beside a vanilla parfait, raspberry wrapped parcel. My least favourite was the coconut, pineapple and lemongrass; I didn’t like the texture. I did, however, think the raspberry caviar was interesting, heavier than I expected, very well flavoured.

The coulis was stunning, sharp and delicious. Finally, we had a yoghurt foam with dried raspberry. I’m not a huge fan of yoghurt but this was very good, a mixture of sweet and sour.

We had a wonderful meal, the food was excellent and beautifully presented, but the dining room was completely devoid of atmosphere. I know, as a hotel restaurant, they have to hold tables for guests, but to see it so empty just seems a terrible waste.
This meal was more than three times what we paid at Armazem de Sol and it wasn’t three times better. While I enjoyed it, it made me really think about rating guides and what they mean. Fine dining doesn’t have to be so formal, it can be fun and I think we are lucky in London to have some great examples of this.

A great meal, just a shame to eat it in such a silent dining room.

This heat is just too much. So much I’ve come ba

I had my first trip to Copenhagen this week since

Want something light but utterly delicious for the

This is one of my favourite dishes to cook, its ve

AD - That’s right, that’s my passport you can

It’s Friday! I’m back in Glasgow with my sis.

Just wanted to apologise about the weather today f