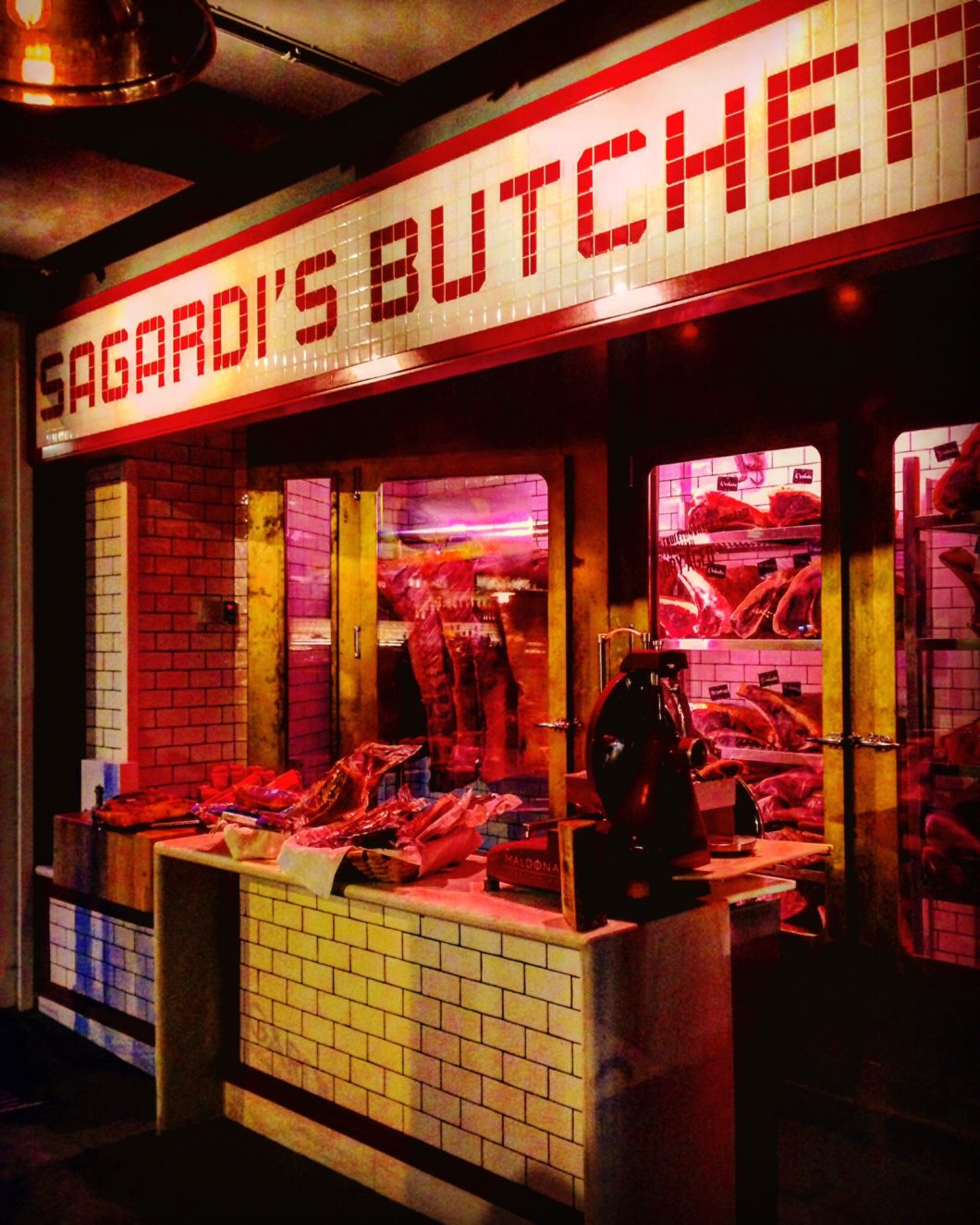 When I heard that Sagardi, the Spanish restaurant chain that celebrates Basque cuisine was opening in Shoreditch I was very, very excited, not least because this time last year I was in San Sebastián feasting on Pintxos. Meat is the star of the show here and the first thing you notice is the beautiful butchers counter as you walk in.

Next you are struck by the beautiful rowing boat hung from the ceiling, as is typical many Basque towns, where rowing is a huge sport. The front of the restaurant is dominated by the butchers, a smattering of poser tables and the main bar, with Pintxos.

I’ll be honest I didn’t do much research beforehand. I was just thinking about Pintxos and little else. So I was surprised how much of the space was given over to more formal dinning. And it made me realise that when I was in San Sebastián I pretty much existed solely on Pintxos which I don’t believe is a bad thing but did mean I didn’t have a great grasp of Basque cuisine.

Recommendations from the staff were only for items from the grill section which are also the most expensive items on the menu. After some further questions, we were also recommended the tuna but it felt like we had to work hard to be recommended anything, that wasn’t a steak or a whole fish. This was the soft launch but it felt like at least the staff running service had come from perhaps on the the other Sagardi’s and were experienced.

The steaks, three options ‘txuleton vaca’ cider house, matured beef or ‘buey ‘ Galician matured beef, are all priced per 100g. The meat does look incredible and while we weren’t brought any streaks to the table to see other tables around us were. The cider house streaks are advertised as between 400-800g but on our visit they didn’t have anything smaller than 800 which means unless you want to share its off limits. Actually looking at my bill as I write this, I can’t figure out the pricing as the weight and price don’t match anything on the menu.

Anyway I digress, we ordered, pan con tomate, jamon croquettes, the cider house, piquilo peppers (because I need to know what a £16 side of peppers is) and red Almadraba tuna from Barbate with ratatouille.

I also make trip to the Pintxos bar and choose three, much like the Basque Country nothing is labelled so it’s all an adventure.
The Pintxos we had were all good and reasonably priced at £2.50. The mortallia was very smooth, but for me lacked the texture and spice I love in any kind of blood sauaguge. The terrine was a great combination of flavours, well complimneted with the sweet chutney and the crisp bread. We also had some complementary chorizo which was both sweet and spicy.

Both the pan con tomate and croquettes were excellent, the olive oil I particularly enjoyed and the croquettes oozed with flavour.

We hadn’t ordered any sides, as we were advised we didn’t need them. We did order the slow roasted Tolosa style red piquillo peppers, they are only available for one month and are hand picked and have to be roasted over open flames and then hand peeled and this is why they are so expensive. They were beautiful, the flavour intense yet delicate and sweet, served simple with oil and rock salt. Would I pay £16? (We went during the soft launch so had 50% off all food) maybe not, but they were lovely and I’m glad I had them. 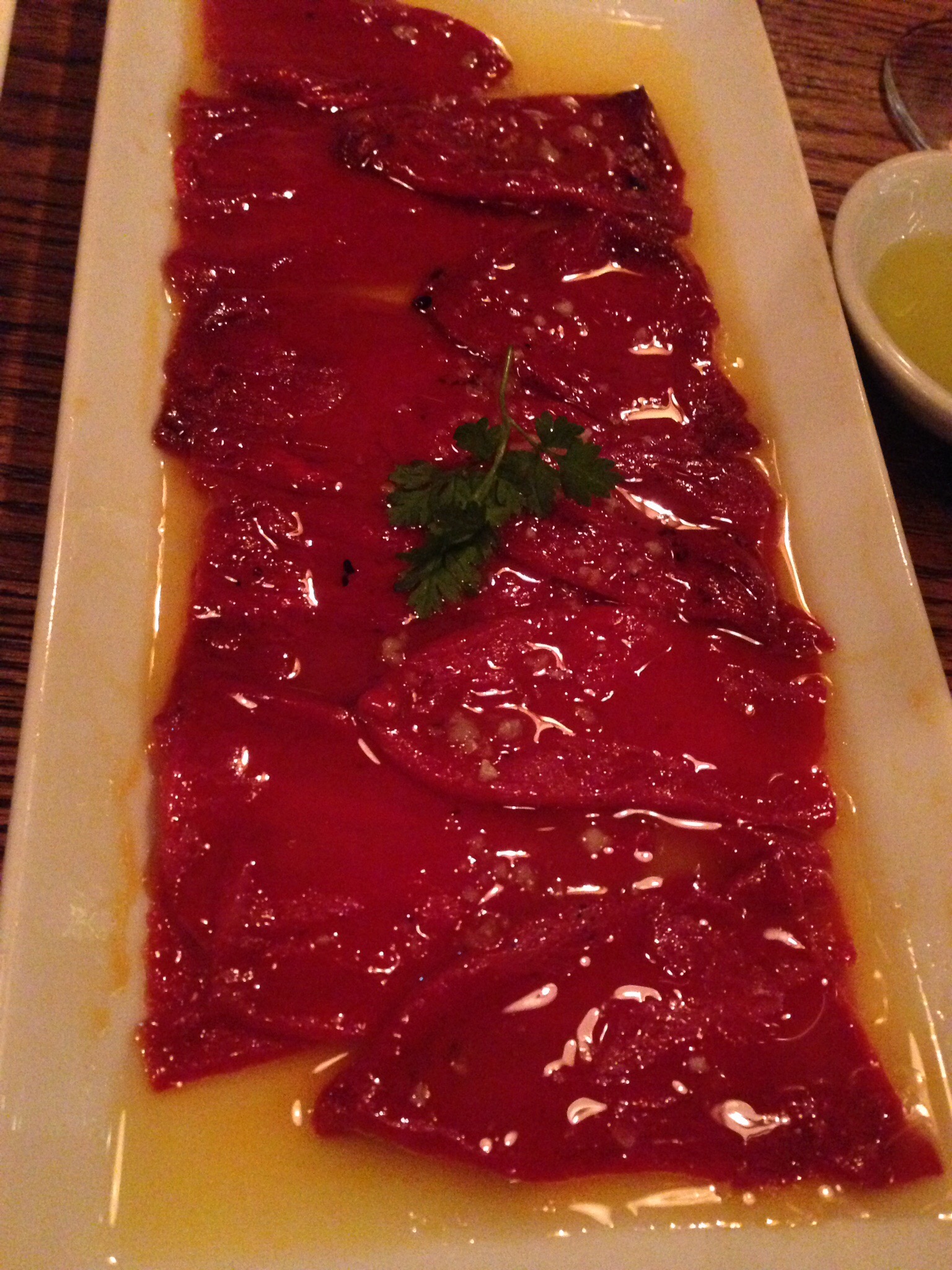 Our steak was like something from the Flinstones, huge. It was perfectly cooked, extremely flavourful and at times a little chewy. The simplicity of just this and the peppers was actually perfect, without all the sides you tasted and appreciated the meat.
The bone needed to be picked up to pull off the grizzled, fatty, joyous bits.

We had expected the tuna to arrive first, only because we were told it would, but there seemed to be some confusion and it arrived after the streak. I think the fact we were served by three different people probably lead to this, but that’s the whole point of a soft launch to iron out the creases.

The tuna when it came was also perfectly cooked and cut like butter and even the ratatouille, something I have little love for, was tasty and it balanced well with the softness of the tuna. 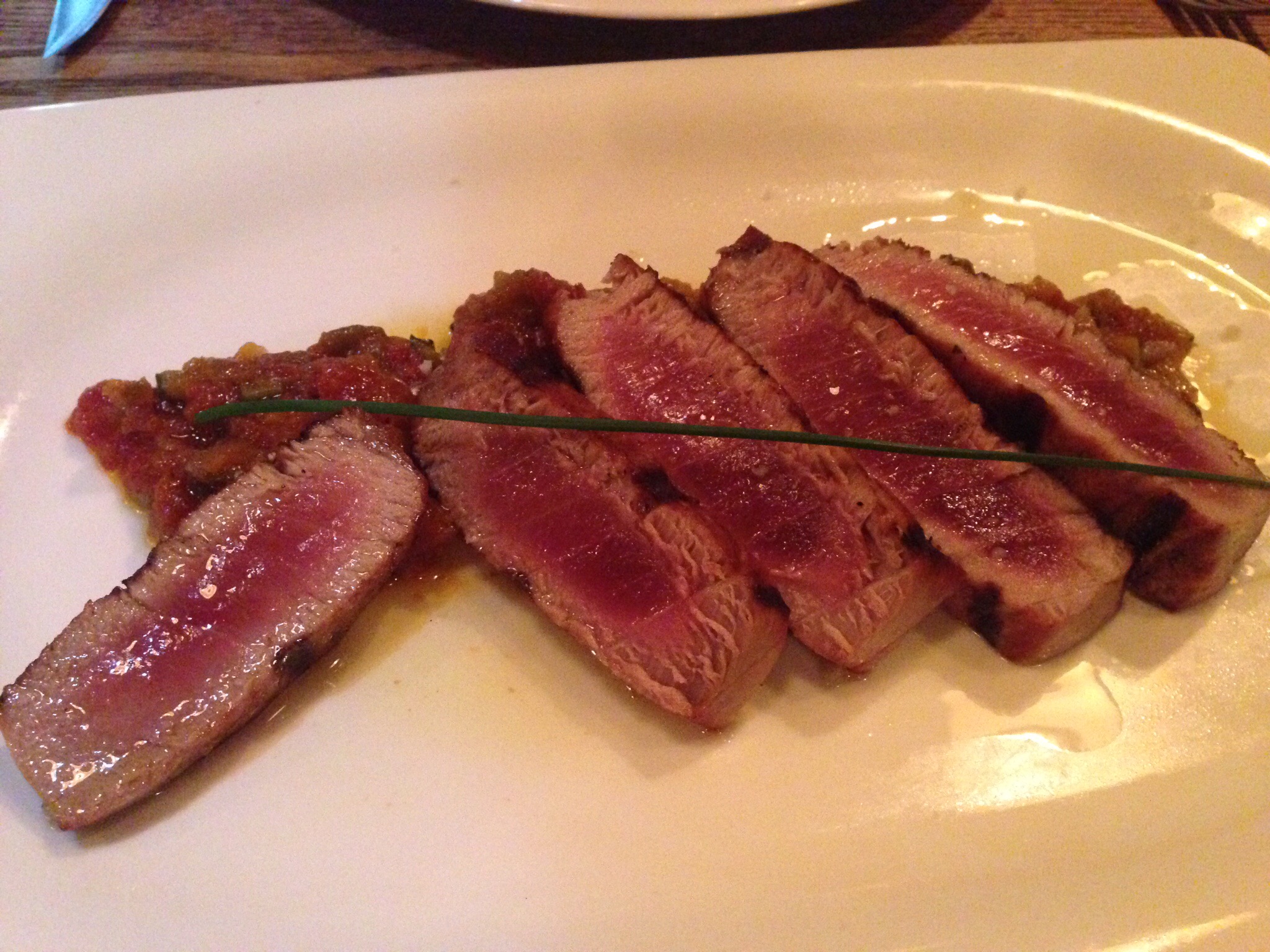 We finished with some incredible truffles that were not overly sweet or bitter. A joyous little mouthful to end on. 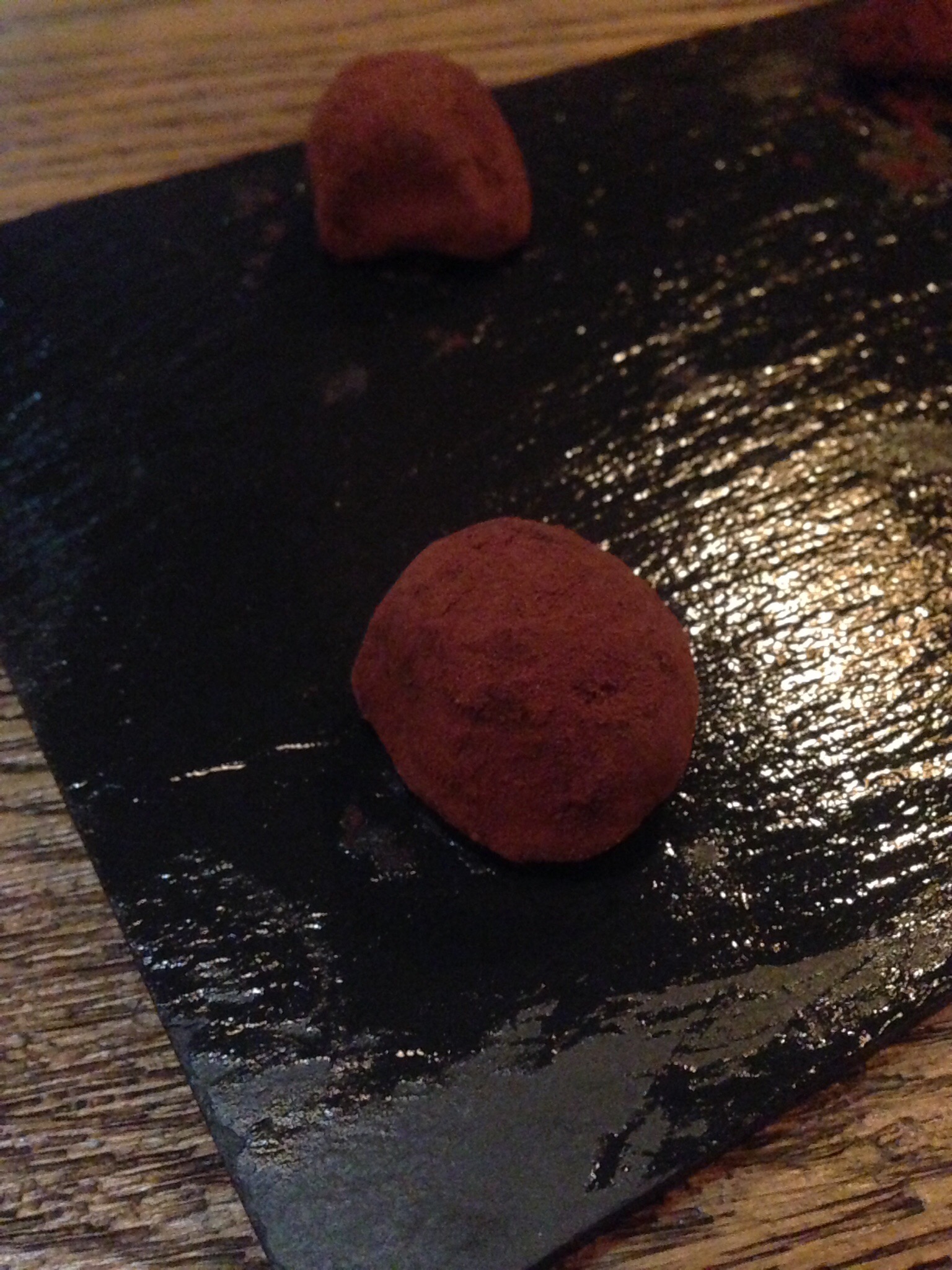 I enjoyed Sagardi’s, I love the butchers, the open grill, and of course the Pintxos. I wonder if they will regret giving so much space to formal dining. The food was simple and well prepared but I felt underwhelmed for the price point and perhaps because of my expectations. Had we payed full price we’d have been over £150 and that was with just two glasses of wine because I’m off the booze. That feels like a lot for what we had. The service certainly needs to be much sharper but it’s a soft launch. It’s the little things that I’m just not in love with, like the closeness of the tables, although some of the big tables are lovely, the twos are so close it’s impossible not to hear your neighbours conversation. The meat is good but it’s too big and not available in the sizes on the menu, so it forces you to order a huge streak or share, if you don’t want to share then unless you are really hungry you can’t have steak. On reflection I think this is much better suited to bigger groups so you can order a whole fish or half a cow and share.

I’m not sure on this one, I’d definitely pop in for Pintxos and a glass of wine on the way home but I’m not sure I’d rush back to the restaurant.

Oh and the website only does reservations and nothing else, not even a menu, that’s frustrating.

This weeks #homingpidgin is my favourite menu over

Living where I do I am no stranger to a curry. Th

For the next week I will silence my voice here to

Good morning. May all your yolks be runny this wee

Last night I decided to try a new restaurant takea

Happy Friday! I’m so excited for the weekend, es

This week at #virtualsupperclub we celebrated Japa

It’s funny how sometimes you end up with even mo

We take picnics seriously here in E1. The weather

In this house Friday night means only one thing, p